Goin' on a bear hunt. 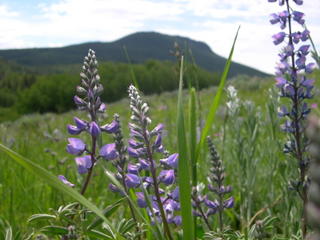 No, not really. But I am going back up to the family cabin for the next three days, and I did see a bear up there last Thursday. Once I get my pictures from my camera to my computer (including one that I intend to call "The Road Less Traveled"), I will see if the picture I took of the bear is worth posting. I doubt it -- I made good and sure I was far, far away before I paused long enough to snap a pic in the general direction of the bear.

What happened is that I was walking down the road with our two small dogs. When we're walking with the dogs, we try to stay on the road so we don't stumble across some vicious wild animal that is better viewed from a car. So much for that plan. About 150 yards away from me (or less?), I saw something big and black lumber across the road. At first I thought it was Piper (our black lab), but then I realized it was indeed NOT Piper. Since Bailey had chased a deer the day before, I started having visions of her attacking the bear, and then running back to me. They say that's what dogs do. So I screamed at the two small dogs and while the bear paused to watch us, we beat a hasty retreat.

I have never looked over my shoulder so much in a 5 minute walk as I did in the time it took me to get back to the cabin. And even though I've been down that road a hundred times before, I'm going to think twice before I take the dogs walking down that road again.

* And in case you're wondering, the picture I've posted is from last summer. I was just enjoying exploring Blogger's new "image" button, which is a great feature, if you haven't discovered it yet.
Posted by Molly at Sunday, June 26, 2005

Ok, so I love this quote from one of the links: "Remember! Once you step on the trail
YOU HAVE JUST BECOME A MEMBER OF THE FOOD CHAIN"

Ah, it's nice to be back in Montana!