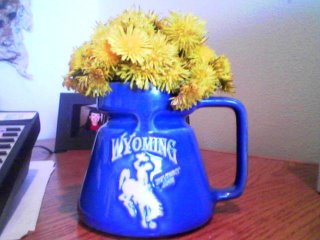 Yesterday at Spanish class, several of my darling students gave me handfuls of flowers that they had picked for me during their lunch. They were unwilling to admit to the skeptic in our class that dandelions are actually weeds.

It reminded me of a poem, the first stanza of which used to hang on the wall of the bedroom that I used to sleep in when I would stay at my grandparents' house:


ONCE in a golden hour
I cast to earth a seed.
Up there came a flower,
The people said, a weed.

To and fro they went
Thro’ my garden-bower,
And muttering discontent
Cur’d me and my flower.

Then it grew so tall
It wore a crown of light,
But thieves from o’er the wall
Stole the seed by night.

Sow’d it far and wide
By every town and tower,
Till all the people cried,
“Splendid is the flower.”

Read my little fable:
He that runs may read.
Most can raise the flowers now,
For all have got the seed.

("The Flower," by Alfred Tennyson)

Dandelions also remind me of Mrs. Simmons English class my junior year of
high school. Mrs. Simmons strategically had us read Ray Bradbury's Dandelion Wine as our last book of the year; she would open the classroom window and have us read, when the flowers are blooming, the birds were singing and spring was certifiably in the air. I know of many-a-person who has loved Dandelion Wine because of that experience. Allow me to indulge in a few quotes:

It was a quiet morning, the town covered over with darkness and at ease in bed. Summer gathered in the weather, the wind had the proper touch, the breathing of the world was long and warm and slow. You had only to rise, lean from your window, and know that this indeed was the first real time of freedom and living, this was the first morning of summer.

The world slipped bright over the glassy round of his eyeballs like images
sparked in a crystal sphere. Flowers were suns and fiery spots of sky strewn
throughout the woodland. Birds flickered like skipped stones across the cast
inverted pond of heaven. His breath raked over his teeth, going in ice,
coming out fire.

Gardening is the handiest excuse for being a philosopher. Nobody guesses,
nobody accuses, nobody knows, but there you are, Plato in the peonies,
Socrates force-growing his own hemlock. A man toting a sack of blood manure
across his lawn is kin to Atlas letting the world spin easy on his shoulder.

It won't work," Mr. Bentley continued, sipping his tea. "No matter how hard
you try to be what you once were, you can only be what you are here and now.
Time hypnotizes. When you're nine, you think you've always been nine years
old and will always be. When you're thirty, it seems you've always been
balanced there on that bright rim of middle life. And then when you turn
seventy, you are always and forever seventy. You're in the present, you're
trapped in a young now or an old now, but there is no other now to be seen."

He lifted one bottle into the light. "'GREEN DUSK FOR DREAMING BRAND
PURE NORTHERN AIR,'" he read."' Derived from the atmosphere of the white
Arctic in the spring of 1900, and mixed with the wind from the upper Hudson
Valley in the month of April,1910, and containing particles of dust seen shining
in the sunset of one days in the meadows around Grinnell, Iowa, when a cool
air rose to be captured from a lake and a little creek and a natural spring.'"

He shut his eyes. June dawns, July noons, August evenings over, finished,
done, and gone forever with only the sense of it all left here in his head.
Now, a whole autumn, a white winter, a cool and greening spring to figure
sums and totals of summer past. And if he should forget, the dandelion wine
stood in the cellar, numbered huge for each and every day. He would go there
often, stare straight into the sun until he could stare no more, then close
his eyes and consider the burned spots, the fleeting scars left dancing on
his warm eyelids; arranging, rearranging each fire and reflection until the
pattern was clear....
So thinking, he slept.
And, sleeping, put an end to Summer, 1928.

Doesn't that just make you look forward to Summer, 2006?

I'll never forget Nikko's first encounter with a thick patch of dandelions during one of our nightly walks last spring. When he spied bright yellow flowers against the deep green foliage, he thought about it all of one second before lunging at the flower heads and consuming them at a ravenous pace. Up to that point we'd been struggling with what name to put down on his AKC registration, but that settled it. Since his breeder required the kennel name to be at the start of each pup's registered name, he was registered shortly thereafter as Windsong's Dandelion Wine.

Sounds just like those darling students. And I think I have a pretty good idea of who the skeptic was, too :)

Just because dandelions are "weeds" doesn't mean they aren't beautiful!

I remember reading this in high school too, and loving it. Probably the same teacher...