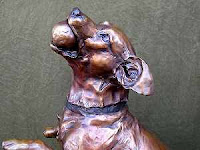 A nine year old Jack Russell Terrier named George is being posthumously awarded a medal of bravery for taking on two pitbulls. George died defending five children whom the pitbulls were rushing to attack.

One dog's life (worth at least a handful of sparrows?) for five in the image of God (worth more than a sky full of sparrows).

"George was a very brave little dog who almost certainly prevented severe injury, if not death, to at least one of the children," SPCA chief executive Robyn Kippenberger said.

"It's truly tragic that he paid with his own life for his instinctive act of courage."

One person's tragedy is another person's heroics.

You know, you read about stories like this and, as a Christian, I can't help but believe that God created these little acts of heroism to point us to The Big Act of Heroism -- one life for many.

Even more interesting is that God created us to long for acts of heroism, whether big or little. Whether we read about little George saving five kids from the pitbulls or someone giving a kidney to save the life of a sibling (or a stranger) or a soldier dying in the place of his comrades (regardless of how we feel about the war), we're wired to love these stories. It's what great novels, great movies, great lives are made of. But we'll never really be satisfied from stories like George's until we understand the Story that knits them together. May we make sense of our lives -- our little tragedies and our little heroics -- because of the one who gave his life for us.

"You have made us for yourself, and our hearts are restless until they find their rest in you." - St. Augustine.
Posted by Molly at Tuesday, May 08, 2007