Back in Business: A Report of Sorts

It's really quite difficult to describe the past 10 days, other than something akin to "adventure of a lifetime." We spent 2 days exploring Quito, followed by 7 days on a boat in the Galapagos Islands. Stepping onto the island of Espanola on Monday morning felt a lot like stepping into a Natl Geo documentary -- in our first 15 minutes of exploring, we were greeted by a beach-full of sea lions, had to step over marine iguanas to get on the path, we saw the legendary blue-footed boobies doing their mating dance, sally lightfoot crabs, pelicans, mocking birds, American oyster catcher birds, a Galapagos hawk ... all in our path! I think I took 300 pictures in the first morning; it was incredible.
We were blessed to travel with another family, so we had fantastic fellowship and constant laughter. We had beautiful scenery, helped by nearly-constant blue skies and calm seas. We ate nonstop. We laid on beaches right next to sea lions. (We were also there during mating season, so we learned all sorts of interesting things about "the birds and the turtles.") If I wanted to complain, I would say that the water was a little too cold for snorkling, but I still managed to swim with penguins, sea lions, sharks, rays, sea turtles and saw a host of tropical fish. 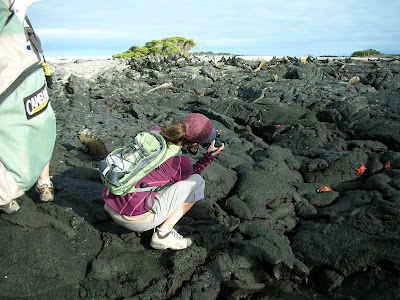 Yes, we hauled Santa hats down for some Christmas photos :) 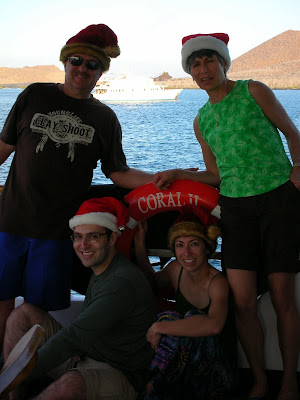 It was especially great to have my brother with us! Here we're on a mountain overlooking Quito. 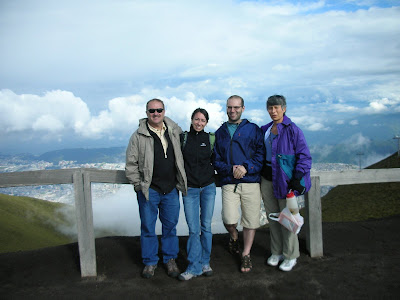 See? RIGHT in our path! There were times we had to go off the path because a bull sea lion or a pair of boobies were blocking the path. 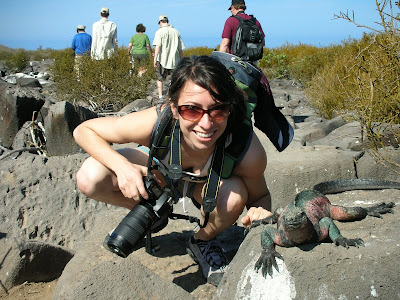 Sea lions. Our guides made it very clear that these are sea lions, not seals. Seals don't have visible ears, and they're smaller. 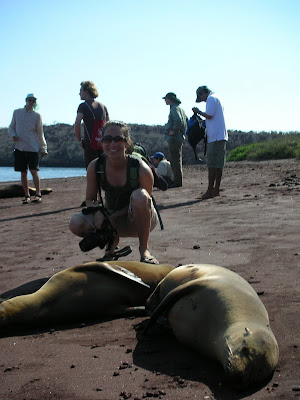 These are blue-footed boobies, and this is part of their mating dance. They do a lot of fancy steps to show off their strikingly blue feet. (Btw, they are called "boobies" because Spanish explorers saw this goofy dance and thought they looked like bobos - fools, or clowns.) 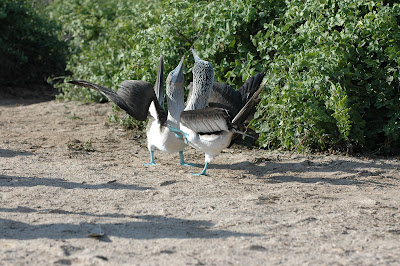 Marine iguana. Adult males are big (about the same size as Bailey) and develop really bright colors, which differ from island to island. There were beaches and rocks with thousands of these guys. Sea lions really like it when they go swimming, because the playful young sea lions will pull on the iguanas tails and hassle them. 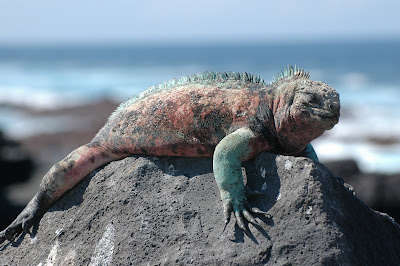 A baby albatros. It was sitting on a cliff, and we sat down about 5 feet from it and watched it, its parents circling overhead, and marine iguanas diving to eat algae underwater. 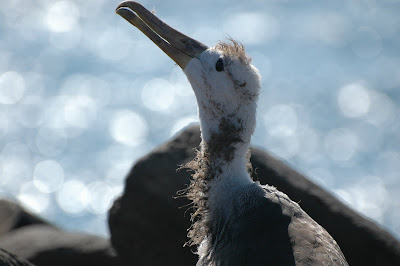 This was actually our first day -- at the real equator. There's a big monument about 50 yards away in a spot that was declared the Mitad del Mundo years ago. And then military GPS showed that it was actually here. They did a couple of demonstrations, and we were convinced. (Water going down a drain swirls in different directions in the northern and southern hemispheres -- it's so sensitive that it was different 6 ft north and 6 ft south of the equator!) 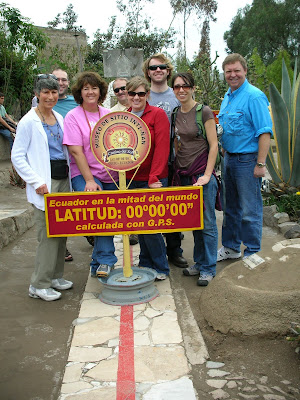 This is where Master and Commander was filmed. It's exactly where the movie says it is, but my guide told me they used rubber iguanas instead of the real ones. 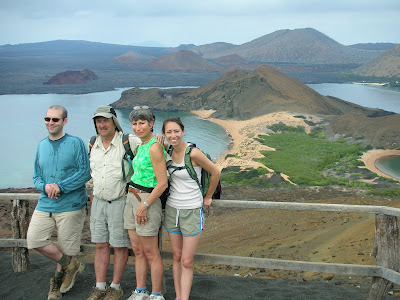 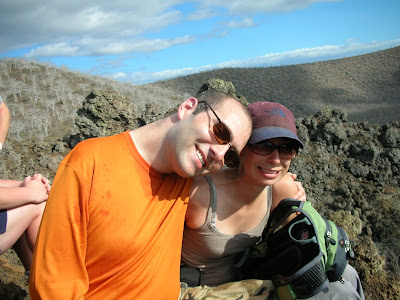 Wow. Thanks for joining me on a bit of my adventure!

also, will you help me out by giving me tips on how to train my son around dogs? what could i have been better today (besides getting more sleep and not being so "yelly")?

love you and welcome home!

Thanks for sharing the great photos, Molly. It looks like quite a trip!

this is awesome! i wallow in jealousy :)

Wow!! Sounds/looks like you had a great time! Must have been nice to get away to a different world for a few days.

Can you email me the name of your tour guide (if it is a "for hire" / public guide)? This sounds like EXACTLY the kind of trip my sister and her husband would take.

(They just got back from two weeks hiking in Costa Rica and raved and raved.)

Molly, what a great trip! Thanks for sharing the pictures. Now I want to watch Master and Commander...

Spectacular pics M! What kind of camera were you using?

Liz, the pics were taken on two different cameras (my mom and I were the photographers for our fam). The close-ups of the animals were primarily taken on a Nikon D70 w/ a 70-200 zoom lens (you can see me holding it in a couple of these pics); the others were on a little Nikon 5mp CoolPix.

Funny thing about the camera w/ the big zoom lens is that I was often too close to the animals -- so I had to back up in order for the camera to focus on them! I'm convinced that people could have taken fantastic pics there w/ a disposable camera.