Not your average astronaut food... 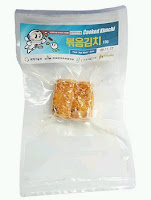 Thanks to my colleague Tim for pointing out that one of my food nemeses has taken on a somewhat transcendant form. Well, not quite, but kimchi is heaven-bound!

Here's the article: Kimchi goes to space, along with first Korean astronaut.

Key quotes: “’If a Korean goes to space, kimchi must go there, too,’ said Kim Sung Soo, a Korea Food Research Institute scientist… After millions of dollars and years of research, South Korean scientists successfully engineered kimchi and nine other Korean recipes fit for space travel… Kimchi - a must-have side dish at every Korean meal - was the toughest to turn into space food. ‘The key was how to make a bacteria-free kimchi while retaining its unique taste, color and texture,’ said Lee Ju Woon at the Korean Atomic Energy Research Institute, who began working on the newfangled kimchi in 2003 with samples provided by his mother.”

This part is the best:

Ordinary kimchi is teeming with microbes, like lactic acid bacteria, which help fermentation. On Earth they are harmless, but scientists fear they could turn dangerous in space if cosmic rays cause them to mutate. Another problem is that kimchi has a short shelf life, especially when temperatures fluctuate rapidly, as they do in space.

"Imagine if a bag of kimchi starts fermenting and bubbling out of control and bursts all over the sensitive equipment of the spaceship," Lee said.

the power of Kimchi! Even godly men like Clowney couldn't stand it. Go figure. I'm still enjoying the fact that I got Beth to eat my kimchi fried rice. Didn't you eat some of it too?

Yes ... yes, you did. Which was also my first (and last) time to eat Spam. I also seem to remember you feeding me kimchi spaghetti and kimchi soup ... I was willing to try it, but I never liked it.