Chocolate kills dogs ... but it's not the only thing! 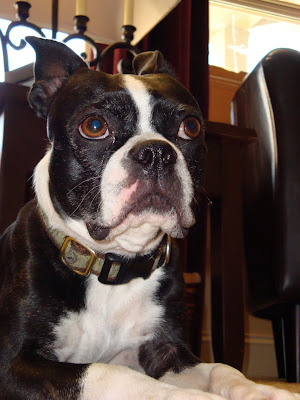 Fortunately, the title of this post is not an announcement of a deceased pooch, although it possibly could have been! Last night, HH and I watched a movie and enjoyed the last of the (unfrozen) chocolate cake. I couldn't eat my whole piece and so had it sitting on the table to finish later. After the movie ended, I went to the bathroom and in the short time I was out of the room, Callie had jumped up on the table and gulped down said piece of cake. Not only was I upset that what she ate included my favorite part, the part with the frosting, I was also aware that this part of the cake was the most chocolatey ... so after some searching and realizing that my syrup of ipecac was basically an empty bottle, I dug out a bottle of hydrogen peroxide and went to work making Callie, um, dispose of the contents of her stomach before they were absorbed into her bloodstream.

In light of that, here's a public service announcement; two actually. First, a video showing how to make a dog throw up using hydrogen peroxide (since that's usually something people have around; salt water can also do the trick ... yeah, I've made my fair share of dogs throw up in my life!)

How to Make a Dog Vomit -- powered by ExpertVillage.com

Secondly, a list of foods that are bad for dogs ... I post it here because it contains a few unexpected items (I used to feed Migo the raisins from my trail mix since I always think the raisin-chocolate ratio is too high!). There are other lists out there, too that mention things like raw eggs, but I think this list is probably the best/most thorough:

Alcoholic Beverages: Any type of alcohol can be poisonous to your pet and aside from intoxication, can cause a coma or even death.

Apple Seeds: Can have varied effects on pets.

Apricot Pits: Can cause respiratory difficulties such as breathing, coughing and sneezing.

Cherry Pits: Can cause respiratory difficulties such as breathing, coughing and sneezing.

Candy containing the sweetener Xylitol: Can cause liver damage and even death.

Coffee: Can result in increased breathing and heart rate, restlessness and affects the central nervous system.

Grapes: Large amounts of grapes can be poisonous to pets and can cause vomiting, diarrhea, lethargy, abdominal pain, lack of appetite and kidney damage.

Moldy Foods: Can have varied effects on pets including vomiting and diarrhea.

Mustard Seeds: Can have varied effects on pets.

Onions and Onion Powder: Can cause gastrointestinal problems such as vomiting and diarrhea.

Peach Pits: Can cause respiratory difficulties such as breathing, coughing and sneezing.

Potato Leaves and Stems: Can cause problems with the digestive, nervous and urinary systems.

Raisins: Large amounts of raisins can be poisonous to pets and can cause vomiting, diarrhea, lethargy, abdominal pain, lack of appetite and kidney damage.

Rhubarb Leaves: Can cause problems with the digestive, nervous and urinary systems.

Salt: In large quantities can cause electrolyte imbalances.

Tea: Can have varied effects in pets.

Tomato Leaves and Stems: Can cause problems with the digestive, nervous and urinary systems.

Walnuts: Can cause gastrointestinal problems such as vomiting and diarrhea, as well as respiratory issues such as sneezing, breathing and coughing.

Yeast Dough: Can be dangerous as it will expand and result in gas, pain and possible rupture of the stomach or intestines.

I have heard that the reason chocolate is so bad for dogs is that it contains arsenic in amounts which humans can handle but a dog is not able to handle the same amount. I accumulates in their syste. I sure it does in ours as well. I am also sure the chocolate insdustry does not want this information on the loose