slow and steady ... and wet 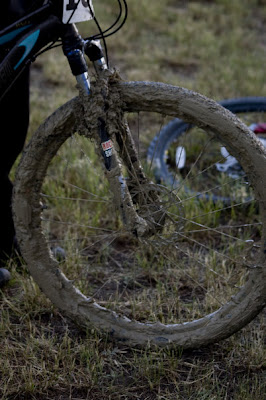 So... I figured that for the race this weekend (a 24-hour mountain bike race about 1.5 hours outside of Billings), I'd get my butt kicked by the 14.7 mile course, but I'd be stuck out there and have to finish, so I'd end up doing whatever it took to finish. Boy was I right ... and wrong.

The race was a 24-hour endurance race; you and your team (they had categories from single to groups as big as 10; ours was a 5-person team, with me as a stand-in for only one lap) are trying to see how many laps you can complete over a 24 hour period, from 11 a.m. Saturday to 11 a.m. Sunday. It's pretty much out in the middle of nowhere -- spotty cell phone service and a trail that covers some dirt roads, but is mostly cow-paths across pastures or deer-paths along the edges of little gullies, etc. Lots of up and down, lots of bumpy, less-than-ideal paths. Those bumps are really hard on your breathing pattern and your arms/shoulders!

Slow-and-steady, that was my motto. Which was working great for me for about the first 6 miles. I was getting passed left and right, but that was okay. I'm abysmally out of shape so I expected that. I had to assure a few people that I was okay as I was pushing my bike up hills and pausing to "enjoy the scenery" (aka, catch my breath). By the time I hit the halfway mark, I'd been riding almost exactly an hour and I was pushing my bike up every incline that was more than 10 feet long ... but, y'know, I'd been told that it was a lot of flat for the last few miles, so I was good with that. Slow and steady ... at least I'll finish.

It started sprinkling rain on me at the halfway point. I thought maybe that's all it would do; that the diagonal bank of dark clouds would maybe miss me? About 2 or 3 miles later, it was pouring rain. I started riding as hard as I could just to get to the end of it, since I didn't have any rain gear and by then, my shoes were sloshing and everything I had on was soaking wet. Those were probably the fastest few miles of my lap -- so much for slow and steady!

And then I hit this field, where the rain had really soaked into the trail and it was so slippery I couldn't actually pedal and make my bike tires go forward -- my legs were too tired and weak to pedal as I needed to. I got passed by a few more hard-core guys and asked one of them to go tell "the group near the bright blue Audi" where I was. I knew that HH would be really concerned about me, so at least then he'd know where I was and that I was still slogging away.

This is where that thought process from the beginning came in. I was stuck out there. I didn't have any choice but to keep moving forward, soaking wet, pushing my bike through the mud and stopping every 30 feet or so to push the mud out of where it was clogging my bike's fork and making it even more difficult to push.

But, oh, it turns out I wasn't stuck out there! For, behold, I saw headlights coming toward me! And then they disappeared. I thought maybe they'd sent someone out for stragglers, but then I started thinking maybe it was a farmer who was checking his ditches. But then the headlights came back, a guy in a parka on a 4-wheeler, with another woman on the front, holding her bike. There wasn't enough room for me to climb on with my bike, but it didn't take more than, oh, .2 seconds for me to decide to leave my bike there and climb on for a ride home.

I was a little bummed at giving up, especially since if I'd made it another 50 yards through the field, I would have been on a relatively flat dirt road for the rest of the ride, maybe 2 miles. I totally could have done that! But since I didn't know how much further I had to go, and I was both chilled and exhausted, I knew I needed to get a ride back in.

Just as I expected, my wonderful husband was waiting at the official tent when we pulled in, and as soon as I hopped off, he took off my helmet and backpack, wrapped me in his sweatshirt and then took me back to our camp, helped peel my wet clothes off and wrapped me up in his sleeping bag. I spent about an hour in the tent, with both dogs snuggling up to me (aside: Migo won the prize for world's best dog, as he was obviously very concerned about my well-being and literally wrapped himself around me until I started moving again), just trying to stop my heart from racing and my body from shivering uncontrollably.

After that, I heated up some ribs over our campfire for dinner, then HH helped me pack up my car and I drove back into town for a good night's rest in a warm, dry bed. It rained all night, but the 4 guys stuck around and ate the free midnight pancake feed, slept some in a more-or-less dry tent, ate some more pancakes and then packed up and came home. HH JUST finished washing all the mud off of our cars, bikes and everything else that was out there.

Email ThisBlogThis!Share to TwitterShare to FacebookShare to Pinterest
Labels: randomness

Congrats Molly!!! As one person told me, it is only 1% of the population that even tries to "go out there" whether it is running, biking, swimming, etc. So any effort is a winner (and finisher in my book) especially with mud like that!! Wow, prouder than punch of the DIL!!