We had an unexpected day given to us -- we'd expected to spend all day mostly on the road and at the last minute, my dad told us that he thought we could probably make better use of our time by staying at home, since we'd be somewhat superfluous for the task at hand.

I, naturally, immediately started thinking about what fun thing to make for dinner! I decided to make the beer-marinated chicken tacos that I'd seen earlier this week. Now, I don't normally have dark Mexican beer lying around the house, so I had to run to the store for some of that, as well as the chicken thighs (and, as you might be able to relate to, I ended up coming away with like 15 items, most of which were completely reasonable purchases, like the gallon of milk, or the ingredients for the appetizer and dessert I also decided to make... but not all of them, shhh...).

We started out with this plate of fabulousness, which, if you can't tell, is bacon-wrapped jalapeno bites. 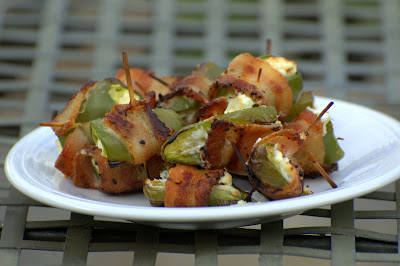 I've been oggling them ever since I saw them on Pioneer Woman. Super simple: cut a jalapeno in half and scoop all the seeds out. Fill that cavity with cream cheese, then wrap it in bacon (1/3 slice fits nicely around one) and secure with a toothpick. She says to bake at 375 for 20-25 minutes; I threw them on the grill at the same temp, flipping halfway through.

While HH did the assembly on these, I made tortillas (my dinner recipe called for corn tortillas, but I decided to make flour ones. Will definitely try with corn again sometime). 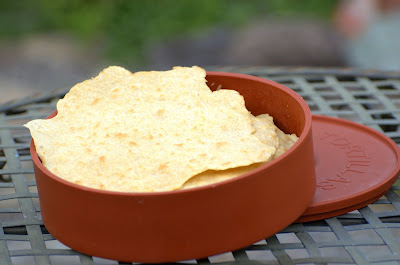 The chicken is definitely the highlight of the dish. The marinade is super-tasty (though I'd prob marinade for a bit longer in the future). Two other notes... First, I'd definitely encourage you to use chicken thighs as the recipe says; it makes for a much richer meat, and the fatty content helps the meat to sort of carmelize and form a crust while cooking. Secondly, I grilled these at around 400, which is higher than you're supposed to cook chicken generally, but I wanted it to char a little bit and form that aforementioned crust. I think it was perfect :) 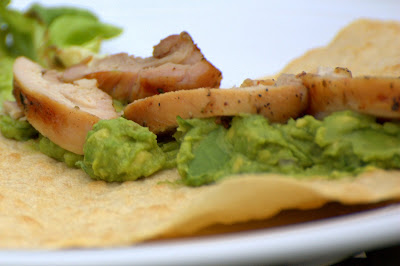 As HH noted, the greatness of this meal lies in its simplicity -- guacamole and marinated chicken on a tortilla -- you really get to enjoy those flavors.

Of course, I couldn't resist adding a little roughage! Just some spring greens tossed with a dressing made of lime juice, garlic, olive oil, cilantro and some green onion. 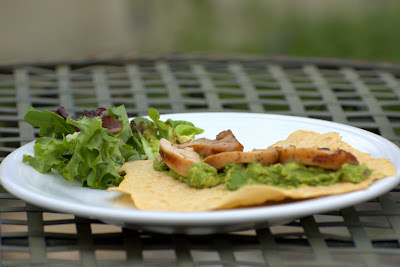 This isn't dessert, but it may as well be! I was craving a Starbucks caramel frapp the other day but didn't want to pay $3.95 for one, so I googled the recipe -- super simple! We actually had these for breakfast today with our french toast (I had raspberry syrup made with raspberries I had JUST picked from our yard!). Dessert tonight will be (if I get around to it) a pseudo-ice cream made by blending together frozen strawberries, half-n-half and sugar, then re-freezing till it's more or less solid. In the meantime, I present to you the 98% off caramel frappuccino! 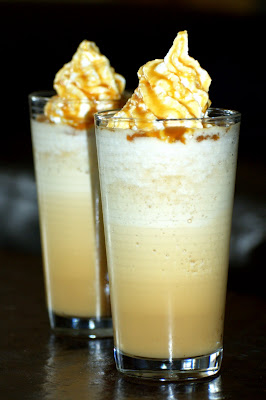 Email ThisBlogThis!Share to TwitterShare to FacebookShare to Pinterest
Labels: recipes

He apparently doesn't mind it in combination with other things. Like two of his favorite foods, bacon and jalapenos!