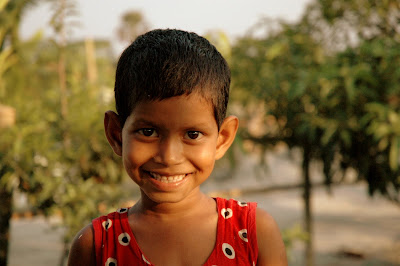 This little girl's face is, to me, a face that embodies hope. For many reasons. For one, she's young and full of promise and life and inquisitiveness and sweetness (and she's got some mean teeth for gnawing on sugar cane). When we first met her -- her parents are the caretakers at the new church complex that we visited last November in B-desh -- she was shy, but her curiosity got the best of her and she followed us around at a distance while we toured the grounds and snapped pictures.
By the time we left an hour later, the shyness had evaporated. Look at her hamming it up for the camera, the little diva! 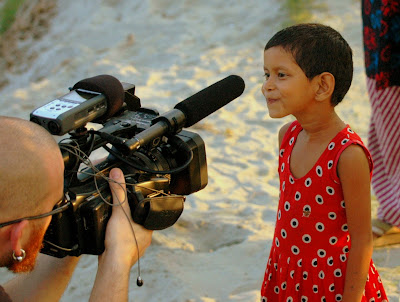 There is another reason her face speaks to me of hope: she is part of a nascent, growing movement in B-desh of followers of Isa. People whom God has called out of darkness and into his glorious light. By His grace, the church in her generation will look completely different from the church right now; her parents and others are laying a foundation -- both literally and metaphorically -- that she will build upon. If God can build his church here, where earthly odds seem stacked against him, he can build it anywhere.
Just the fact that this little girl was born into a Christian home is a miracle. But that hope isn't just for her: isn't it a miracle when any of us believe?

But you are a chosen people, a royal priesthood, a holy nation, a people belonging to God, that you may declare the praises of him who called you out of darkness into his wonderful light. Once you were not a people, but now you are the people of God; once you had not received mercy, but now you have received mercy. 1 Peter 2:9-10