You might have noticed that there were what looked like two Bailey's in the first picture of my most recent post. Then again, you might have been so stunned by the majesty of the poetry and the beauty of that owlish moment that you didn't examine the picture.

But if I've now peaked your interest, there are not, in fact, two Bailey's. There's one Bailey and one Callie (formerly called Kiwi Jellybean -- ugh!). 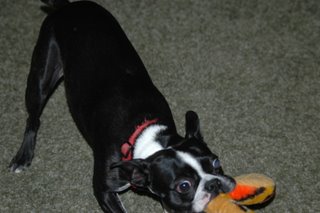 Callie was abandoned at my vet's office a week or two ago. She's a 2 1/2 year old Boston Terrier who looks like a skinny Bailey whose ears stick up better. She's very playful, loves people and is already pretty much trained. She hasn't been well-socialized with other dogs, so she needs to do some learning how to relate to her brother and her cousins, but they're doing a good job of introducing her to the pack mentality. She loves to play tug-of-war and to shake stuffed animals to death ... she was born to be wild! 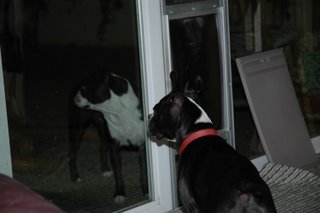 I'm still adjusting to the idea that I have two dogs, but I find myself liking her a lot, especially when she follows me around with little eyes that say, "You saved me, I love you." 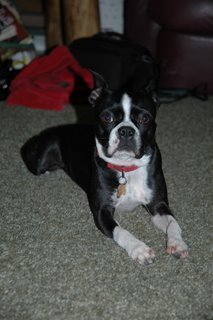 I actually have some real thoughts to share on this blog, too ... specifically about a movie I just watched, and about Matthew 5:11-12. But you'll have to wait until I have a few moments to actually compose them.

In the meantime, thanks for all your comments (on the blog and verbally) about the owl poem. You make blogging so fun!
Posted by Molly at Tuesday, October 10, 2006

Her ears DO stick up "better" than Bailey's, but I love the floppy-eared look that Bailey gives, especially when she's interested in what food might be in your hand! :)