Tales from the Land of Thai 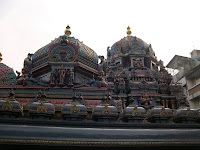 I think my mind has finally caught up with Montana's time zone; on Monday afternoon, I was trying to type an email in Spanish while my mind was still somewhere over the Pacific Ocean. That was an adventure.

Nonetheless, I'm told that my statute of limitations has expired and I am expected to post an update my trip or else... So here goes:

I left my house at 4:30 a.m. on Saturday morning and arrived in Bangkok a little over 32 hours later, where it was then Monday morning. One of the first things that caught my attention was the impact of globalization. For one thing, the demographic breakdown that I noticed in the San Francisco airport was virtually the same as that in the Tokyo and Bangkok airports.

On the other hand, there was also ample evidence that I "wasn't in Kansas anymore." The written Thai is a beautiful script that looks nothing like English. In the neighborhood of my hotel, there were also numerous stands selling typical Asian souveniers, and we were eager partakers of those delights. I also noticed that little statues of Buddha were ubiquitous; it's rather strange to be walking down the street and to see somebody pause and bow to Buddha. I couldn't help but think of Isaiah 44: "Half of the wood he burns in the fire; over it he prepares his meal...
From the rest he makes a god, his idol; he bows down to it and worships..." (vv 16-17).

I must have been staying in a fairly touristy part of the city; if one were to judge by the stores on the street, one would think that all the Thai people did was gems, massages, and custom-made clothing.

I was in Thailand for a conference of seminary leaders from all over Asia. There were 17 countries and 39 seminaries represented and, over the course of the week, we heard a number of outstanding presentations about how the seminary can tailor its curriculum so as to develop genuine and long-lasting Christian leaders. It was really neat to get to know the people who were there -- they have such more interesting lives and stories than I. I spoke at length to people from countries that include Taiwan, India, Sri Lanka and the Philippines -- quite the exposure for my first foray into Asia!

One of the highlights of the trip was skipping out on the conference and visiting the Bridge on the River Kwai. Apparently they took some liberties with said movie, but the tale of suffering and death by those employed in the building of the Death Railway along the Thailand-Burma (Myanmar) border was sobering to behold. We visited a museum that documented the history of the railway, a cemetery in which several thousand soldiers were buried. We also took a ride on the railroad itself, seeing a fair bit of the beautiful Thai countryside and culminating with a crossing of the famous bridge itself.

I left Thailand early Saturday morning and again spent over a day en route. By the time I got to Tokyo, I was already feeling exhausted, and I still had about 20 hours of travel ahead of me. I also had a pounding headache and was feeling more than a little grumpy about the fact that the designers of Tokyo's airport wanted to maximize the shopping time of people traveling between gates (thereby minimizing convenience for those same people). Interestingly, both the Tokyoa and Bangkok airports seem to target affluent travelers -- stores include Tiffany's, Ferragamo and Coach! So, I found a Starbucks (a Gen Xer's best friend?) and sat there until I'd made a list of 15 promises of God to me. It's hard to stay grouchy while sipping a white chocolate mocha; it's even harder to stay grouchy while reminding yourself of how lavishly God loves you and has blessed you.

So, that's my trip, in a nutshell. I've uploaded 49 photos, and here's a link to the album where they are stored. They should approximately follow the narration of this post. And now, I must head off to bed; FYI: on the morrow, the digits of my years will add up to 9.
Posted by Molly at Saturday, December 16, 2006

It's fun seeing your photos, with shots my dad didn't get, like of him hanging out of the train to take a picture... :) I'm glad you got to make some contacts at the conference - did you get some custom-made clothes, too?

One of the most striking videos my dad took was of a woman bowing before a demon-looking thing by the Golden Buddha; her lips were moving as she prayed, and you could tell she really wanted something. It was a pretty urgent reminder that there are many people all over the world who need to hear the gospel. (Me, too!)

Thanks, Amanda, for the birthday wishes and the comment. I did get two pairs of custom-made pants, since I have trouble finding pants that fit me well. I heard that you were wearing a beautiful new skirt yesterday in church, so I can't wait to see it sometime!

I took the picture of your dad because I thought your family would appreciate it -- I'm glad you recognized him! :)