One of those random conversations with a coworker...

I just learned this: 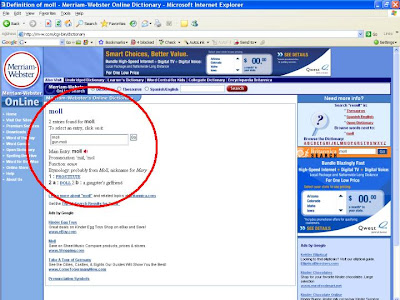 For those of you who can't read this copy of m-w.com's definition of "moll," it says:
Pronunciation: 'mäl, 'mol
Function: noun
Etymology: probably from Moll, nickname for Mary
1 : PROSTITUTE
2 a : DOLL 2 b : a gangster's girlfriend
I've always known that "Molly" was an Irish/Gaelic nickname for "Mary." As a name, rumor has it that it can mean "wished for child" or "sea of bitterness." I'll have to cogitate on "gangster's girlfriend" for a while to see how I feel about that. In the Bible, names describe a person's actions or character ... but I somehow doubt that this new revelation is prophetic. (I'm ignoring definition #1.)

A humorous side note is that I often meet people who say, "Oh I love the name Molly, but I can't tell you why." I immediately know that they have/had a beloved dog whose name could also be shortened to mean "gangster's girlfriend," but they don't want to offend me with the association. Hey, I slept with 5 dogs on my bed last night ... that's not an area where I'm likely to take offense quickly!
Posted by Molly at Thursday, February 15, 2007