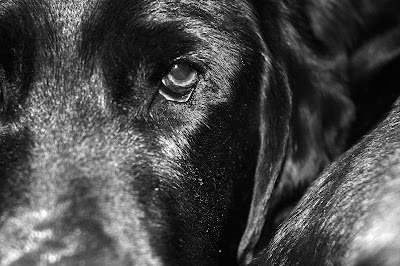 Ha ha! Despite what it may seem, this isn't turning into a dog-blog. I'm actually writing on something completely different; that was just a nice play-on words.
So, I’m usually pretty ambivalent about Valentines Day [aka Black (Lab) Thursday], but this year the in-your-face nature of this “holiday” is pissing me off. Yeah, I’ll be honest about how I really feel. :)

Rather than rant and rave, or polish off a bottle of wine and pout (okay, maybe I'll do that too), I figured I’d take this opportunity to reflect a little bit on a thought that’s been rolling around in my mind for a while, and this seems an appropriate time to externalize it. The problem is that it’s only been rolling around in my mind, and I’m not confident that the rough edges have been polished enough for coherent public sharing. But I’m going to try.

What I’ve been thinking about is contentment; and not contentment in general, but the way that contentment is related to other similarly-unglamorous graces like perseverance, thankfulness and humility.

How is contentment related to perseverance? This is a question that I've been mulling for over a month. I don't have a concrete answer, other than that they feel like they're flip sides of the same coin, though one feels more active and the other more passive. I persevere in a situation I'm not (inherently) satisfied with because I know that it's where God has me. Thinking that perseverence is an aspect of contentment gives it an active sense to me -- that it's not just about sitting around pretending I'm happy, but it's pressing on, striving to achieve that state of satisfaction, and not giving up until I firmly believe that I am experiencing the fulness of God's mercy and love to me.

How about thankfulness? This one is a little bit more obvious. When I focus on what I'm thankful for, I'm less likely to dwell on what I don't have. There are so many good gifts from God's hand; thankfulness is both a command and a gift.

Humility? I am content when I don't think I deserve more than I have. At staff devotions this morning, we discussed how pride fuels discontent, this feeling that I'm better than that. Humility, on the other hand, expresses thankfulness, knowing that we don't deserve any of it.

Finally, I woke up this morning thinking about Paul’s statement in Philippians 4, “I have learned the secret of being content in any and every situation.” I started thinking how contentment looks SO different depending on your station in life. Contentment looks and feels different when you feel you have plenty and when you feel desperately in want. They're both absolutely possible, but it's a different process to learn; when your situation changes a little bit, it's sometimes shocking to uncover an appalling lack of contentment in an area where you had previously thought you felt fully satisfied.

And why didn’t Paul tell us what the stinkin’ “secret” is?!? Oh wait, he did: "I can do everything through him who gives me strength." I can be thankful and content, because God won't give me more than I can bear. Because God truly is all I need. And because God is so good that he's not just all I need, but he's better than I can imagine, better than all I could desire. Gosh, it would be nice to believebelieve that.

God, give me the grace to be content, especially in those areas where I'm just now realizing how far I have to go.

UPDATE: And I thought it couldn't get any worse; reading this almost made me throw up (literally).
Posted by Molly at Wednesday, February 13, 2008

"it's not just about sitting around pretending I'm happy, but it's pressing on, striving to achieve that state of satisfaction, and not giving up until I firmly believe that I am experiencing the fullness of God's mercy and love to me."

Just a thought I'd like to add to this statement, which I agree with. Perseverance is also not giving up until you firmly believe that you have done all you can to 'rectify' or 'alter' the thing you are discontent about - and therefore know that this is where God wants you to be. This process can often be long and painful. Perseverance often means *not* settling as much as it may mean settling.

For instance, a friend's wife desperately wants to have a child. But thus far the Lord has not given her one. She wants things to just 'happen naturally', and therefore has not done the things that one must often do when things don;t happen naturally. (Ovulation calendars and temperature tracking, etc etc.. venturing into TMI land) But at the same time, she is anxious and discontent that she has not gotten pregnant yet.

I think what you are saying (or maybe its just me saying it) is that the perseverance side of contentedness, is knowing that you have done all that you can to achieve the thing you are "waiting" for - and then, and only then, you can rest knowing that it is in God's hands, and THEN you can be sure you are experiencing the fullness of God's mercy and love towards you.

Maybe my additional thought is really the same thought you were having.

Great comments, Greg! I'll have to mull them over a little bit more :)

Actually, I was saying something different about perseverance, although your point is absolutely true. What I was attempting to say was that contentment takes an element of deliberate-ness (i.e. perseverance); that is, it takes deliberate effort to decide that you will be content and to remain so -- to, as Martin Lloyd Jones says in "Spiritual Depression" "take your soul to task" and essentially wrestle it into contentment.

Now what you've said adds a great nuance to that -- that we can't just sit back and equate laziness with contentment.

Hmmm, I feel another blog post cooking. I'm going to sleep on this, hopefully more later! (thanks for your prayers)

You know, I also think that this Black Thursday also is a breeding ground for discontentment. For the singles, it is watching the flowers and chocolates being given out and trying not to be envious. For the "attached", there is this hidden V-day standard set that must be met. And that always leads to disappointment because finding out that standard involves reading minds....which, um, doesn't quite work. So, I'm with you about the "holiday", Molly. It's dumb. It encourages disappointment and discontent no matter who you are.

I will also be praying for you as you wrestle with this. :)

BTW, that's a great picture of your boy. I love those puppy-eyes...just asking to be snuggled with. :)

Thanks, Andrea -- that's exactly why I thought this was an appropriate time to talk about contentment. I love your phrase "breeding ground for discontentment" -- very well-said.

By the way, I was at Walmart last night about 9:00 and had to laugh at all the poor guys standing in line to buy the token box of chocolates or flowers. I could tell they probably resented the day more than a lot of single people!