One is the loneliest number... 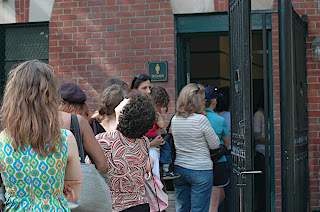 I was thinking today about being "on the inside."

I have never felt like I was on the "inside" of a group. I didn't fit in with any particular group in elementary school (and I distinctly remember the groups). I homeschooled in jr. high (and so didn't fit in anywhere but at least, mercifully, I was removed from a social group that can be particularly cruel to outsiders). I was decidedly unpopular in high school. Friends from college may argue differently, but I probably was in my "hayday" of popularity in college, meaning that I had several groups of friends with whom I was comfortable and felt I fit in. In seminary, I perhaps developed some of the deepest friendships I had yet to experience (probably more because of my own growing maturity and ability to love people than because of those around me), but because I was a woman in a population that was overwhelmingly male, I was inherently an "outsider."

I have not shed this feeling of being an outsider since then. While some of my readers who know me in these circles may be surprised, I still feel decidedly like an outsider: at work, at church, in my neighborhood, in the community at large.

Two thoughts emerge from the morass of thoughts swirling around this subject (not a new thought for me, by the way). The first is that I would be surprised if there were anybody on this world who didn't feel this way. I look at person X, Y or Z in my church (for this is really what got me thinking about it today) and realize, they probably feel "on the outside" more often than I suspect. I have no idea what makes them feel "outside," even when they may look like they are on the inside. And a word to the wise (you can glean this wisdom from any tween movie): you never know when "inside" will become "outside," so don't take it for granted and don't assume you will be there forever.

The second thought is probably more significant: I have long wondered if God didn't create us to be "outsiders." Obviously we aren't supposed to be "in tight" with the world. But what about with each other? Maybe this somehow goes hand-in-hand with the pilgrim motif: what if God made us to constantly feel just a little (or a lot) "outside"?

I know that I, for one, am certainly more conscious of God's call on my life when I am not comfortably on the inside. I greet new people in church because I have been the new person when nobody greeted me. I'm less judgmental of the person who obviously doesn't have it all together, because I know that I don't either (I just hide it better, sometimes). I recognize the glance of loneliness because I know that look in my own eye.

My hunch is confirmed by Andree Seu and C.S. Lewis (and if Andree, let alone Lewis, agree with me, I'm in good company):

In 1944 C.S. Lewis gave the Memorial Lecture at the University of London's King's College. Of all the charges he might have given the eager young scholars, he warned against desiring to be in the "inner ring." "I believe that in all men's lives at certain periods, and in many men's lives at all period ..., one of the most dominant elements is the desire to be inside the local ring and the terror of being left outside." Lewis adds, "Unless you take measures to prevent it, this desire is going to be one of the chief motives of your life... Any other kind of life, if you lead it, will be the result of conscious and continuous effort."

What is the difference between being resigned to being an outsider and being an outsider with a purpose? I think it has something to do with gathering other outsiders around me, recognizing that we're all outsiders in one way or another, and going in a common direction without creating our own "in group." Maybe I'll start a group called OTWAP - Outsiders Together with a Purpose. The only membership requirements are a) that you feel like an outsider, and b) that you are committed to welcoming others to your outsider group.

Ability to affirm these two conditions is, of course, preconditioned on something more fundamental:

Perhaps all lusts are corruptions of good desires. Before "sin, the flesh, and the devil" got a hold of us in Eden, we desired (and we had) sweet intimacy with the Lord -- and because of that, with each other. His love, and the assurance of it, were the wellspring from which to bathe our neighbors in nurturing, the hub of a solid soul from which the spokes of ministry and not manipulation emanated.

Intimacy is not a secondary agenda of the Incarnation and Passion of Christ. The salvation these wrought were a salvation into the sweet lovemaking of the eternal Trinity. Being somebody, being affirmed, delighted in, held in close embrace, are where reality begin and where it all goes to.

(all quotes are from Andree Seu, "Be Somebody," Normal Kingdom Business.)

Great thoughts! I think this line of thinking goes along well with the "no one person (or many friends and acquaintances ;) will complete my lostness or loneliness." I have marveled at the blessing this has been in my life since I was a teen -- though that doesn't mean there aren't struggles with this idea at times --- and I have already been rewarded with the blessing of the testimony that only my Lord and Savior, Jesus Christ, will ever be THAT person and fill THAT hole in my life --

Great post! As soon as you get that new chapter of OTWAP started, just say the word... :-)