We've had two pork-based meals in the last 3 days, both of which are a bit of work but totally worth sharing as they would be "company-worthy" meals.

The first was these Pork Patties with Lime Leaves and Cilantro. I had some lime leaves leftover from a Malaysian curry attempt (we bought them straight from the kitchen at a Thai restaurant), which is the only really hard-to-get ingredient in this recipe. I paired the patties with Pioneer Woman's Simple Sesame Noodles, to which I'd added some more veggies (shredded cabbage, edamame, red bell pepper). There was so much flavor in each of these dishes, though, that I think I'd go more simple in the future, as the Pork recipe recommended.

The second was this recipe for Tacos al Pastor. We 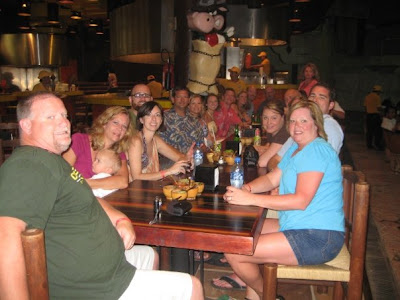 had tacos al pastor twice while we were in Mexico, and HH was, well, in love. We came back to the States and did some googling and learned that Tacos al Pastor ("Shepherd Tacos") are a fusion food, emerging from when Lebanese immigrants brought their style of cooking lamb to Mexico, and Mexicans adapted it for pork and the spices they have available.
The consistent basics of tacos al pastor are that it's heavily marinated meat slices that are layered on a vertical spit and roasted for hours, after which the person serving it slices off thin strips to be served on a simple corn tortilla with a couple of different salsas. It is quintessential Mexican street food, but every Tacos al Pastor purveyor closely guards his or her recipe. Except me, and a bunch of other Americans who are trying to recreate the deliciousness that is Tacos al Pastor. (If you look carefully in the back of this picture, there's a guy carving meat off of a vertical spit. Google it if you want a better picture!)
Other commonalities: some variety of chiles, pineapple (the enzymes in it tenderize the meat, and it also adds sweetness and acidity) and pork.
I started with this recipe but wanted to do it in the crockpot, which I've found is a great way to get amazingly-flavored, tender, moist pork. I used a pork butt, cut it in slices as the recipe recommended and then tied it back together and set it in a steamer basket in my crockpot (I didn't want it to sit in the juices and get too mushy since the meat we had still had a lot of form). It cooked on low for 8 hours and then stayed on "warm" for another 2 or 3 until we were home and eating.
Other changes I made were: I used canned pineapple and didn't set any on top; I toasted the chiles before soaking them; I forgot the paprika and don't have achiote; I used 3 ancho chiles because I like them so much.
HH and his dad LOVED this. I think the recipe needs more tweaking, to which HH responded that he looks forward to a lifetime of tweaking this recipe. My next move will be to use less cinnamon (I thought it was a little heavy on the cinnamon) and maybe add some cumin for more depth of flavor. It was quite good, though; we ate it with corn tortillas, a simple tomato-jalapeno-green onion pico de gallo and some guacamole.
Posted by Molly at Tuesday, December 08, 2009