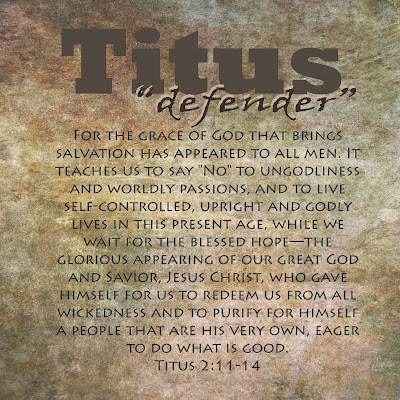 Babies are so much about the future, even with as much fun as it is to enjoy them in the present.

People are consistently commenting what a laid-back, content baby we have. I look at his sweet sleeping face and picture him as a tall man like his daddy, strong in a quiet, determined way. Will he will be a socially-awkward introvert like his mom or a comfortable-anywhere-with-anyone extrovert like his dad? People also have remarked since he was born at what an alert baby he is -- looking around, taking things in, making a lot of eye contact with people who are holding him (and also smiling a lot at them). He hardly ever cries without good reason (which will be great for his first plane trip in a few weeks!), even now as he's suffering a stuffy nose and cough from his first cold.

We named our son Titus, which, according to some sources, means "defender."

We chose the name a bit on a whim, it being a biblical name that was not common but not strange (at least to our ears). Only later did we think about a life verse for him (see picture) and his name's meaning.

Isn't it just like American evangelicalism to choose something we like in Scripture and only later import (our own) meaning to it. Whoops.

Nonetheless, I like that in nearly every other culture, names have meaning, and people are named (or renamed) according to their history ("Isaac"), their calling ("Peter" and "Malachi"), their future ("Abraham"), or how they reflect God's character ("Micah").

So now that I'm coming to know my young one as more than just something with hiccups in my belly or someone who nursed really well from the get-go, I find myself contemplating, especially in the wee hours when all else is silent, how Titus might live up to his name. What or who might he defend?

May he not be defensive. May he not communicate in such a way that causes others to become defensive. May his hands and feet, and his heart, be quick to do good, so that others never have the need to defend themselves against him.

Regardless of who he becomes and whom he defends, he will fall short and have to call upon his own Defender, the only one who can save him from himself. Even as his fragile young life makes me think about the future, may his struggles and shortcomings draw him to think about the future, what sort of man he will become and what sort of future Christ has secured for all of us.

"For the grace of God has appeared, bringing salvation for all people, 12training us to renounce ungodliness and worldly passions, and to live self-controlled, upright, and godly lives in the present age, 13waiting for our blessed hope, the appearing of the glory of our great God and Savior Jesus Christ, 14who gave himself for us to redeem us from all lawlessness and to purify for himself a people for his own possession who are zealous for good works."
Titus 2:11-14
Posted by Molly at Monday, January 24, 2011

Molly, this is an absolutely wonderful post! Preserve this one for Titus and his future wife :) LONG time in the future, but a mother's desires for her son speak volumes. SO enjoy your enjoyment of being a mom!!!! -- Annette