This is what 750 cows look like in their boxes

Apparently it was 750 cows, not 650. I realized that as I put them back in the boxes (which were mercifully left outside of my office for me) ... each box had 250. If you wonder what 750 cows look like when they're not strewn across someone's office, here are the pics of the clean-up (with the exception of a few left behind as a fond "recuerdo"). 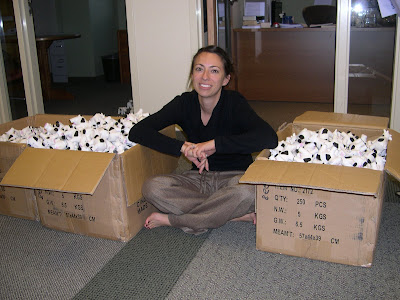 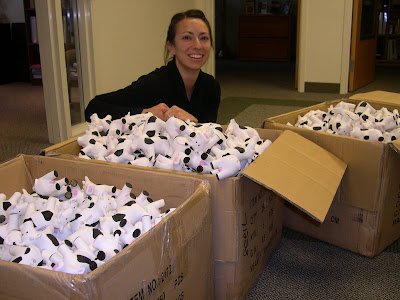 I love my cow-orkers! And they're going to love me when I start exacting my revenge (bwa ha ha!).

UPDATE: I've had enough people ask "why Peacemaker cows?" (yes, Addie, that is a logo you see branded on their backs), so I'll give you a brief explanation: several years ago, we had a promotion that involved giving these little guys away; there are at least 750 that we didn't give away and a couple people found the boxes in our storage area several months ago. We've been sending them around the country/world for pics (I just got pics today of the cow in Korea and Taiwan!), but a couple of clever people decided to "kick it up a notch" while I was away.
Posted by Molly at Wednesday, October 31, 2007

By the way, where did they come from and what are they for??